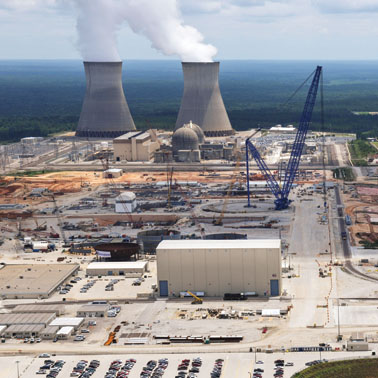 One challenging element of this project was to develop 36” and 108” diameter rubber expansion joints in an in-line pressure balanced configuration. This configuration was needed to minimize the loads on sensitive piping and equipment within the plant.

When Chicago Bridge and Iron (CB&I) was selecting an expansion joint manufacturer for their EPC contracts at VC Summer Nuclear Station, Units 2 & 3, and Vogtle Electric Generating Plant, Units 3 & 4, they appreciated that GRC had an effective in-line pressure balanced design that would meet their requirements. They were satisfied as well to recognize that GRC has over 60 years of expansion joint experience, and are also the original equipment suppliers in nearly half of the nuclear plants in the United States, as well as many others overseas. Considering there has not been a new commercial nuclear power plant built in the US in over 30 years, all aspects of these four Westinghouse AP1000 units required the highest level of quality and design assurance.

During the design phase, GRC manufactured prototype samples and performed finite element analysis to provide CB&I with further assurance that our in-line design would exceed expectations. Manufacturing nearly fifty 120” diameter expansion joints was another challenging element of this project; however with GRC’s extensive experience we knew we had the capability and capacity to do the job. GRC was awarded the contract to supply the balance of plant consisting of hundreds of our 1100 Series rubber expansion joints, ranging from 3” to 120” diameter in both single and multiple arch designs, which required over twelve flatbed trucks for delivery of each site’s shipment.
General Rubber Corporation prides itself on providing powerful solutions for difficult design problems, allowing our expansion joint designs to range from the simple to the simply amazing.